The Sutherland Shire is bordered by 19 beaches along the east coast, from the cliffs of Cape Solander in the north to the waves of Burning Palms in the south. Combine this with 200 kilometres of sparkling waterways and bays, there’s plenty of choice when it comes to water activities.

The beaches of Cronulla are situated on the Bate Bay coastline in the south eastern corner of Sydney. The area covers approximately five kilometres of sandy beaches servicing more than 6,000,000 beach users annually. Here are the lifeguards top tips for keeping safe whilst at the beach:

Sutherland Shire Council also has a beach wheelchair that is available free of charge for community use at Cronulla Beach. The beach wheelchair provides people with the freedom to enjoy the sand and the surf without any accessibility challenges.

Go to the beach education site Surf Hero  especially designed just for kids! Check out the fun activities about safety signs, rip currents, learning to surf and the role of Lifeguards and Lifesavers.

We have a further 15 non-patrolled beaches, from north to south:

We have eight rock pools and netted baths;

*** Please note that dogs are prohibited on the beach and in all ocean or tidal paths unless otherwise signposted.
The rock pools and netted baths are not patrolled by lifeguards.

The Sutherland Shire is flowing with stunning waterways and dotted with beautiful bays.

If driving in from the north over Captain Cook Bridge, take in a little bit of modern Australian history. To the left of the bridge is the site of Lieutenant James Cook's first landing in Australia, on the southern banks of Botany Bay. See Our Story here.

The bridge crosses where Botany Bay meets the mouth of the Georges River. From here the river flows from Taren Point through to Sandy Point in the west, and feeds into Woolooware Bay, Gwawley Bay, Oyster Bay, Bonnet Bay and the Woronora River.

In the south, Port Hacking flows in from the Tasman Sea between Cronulla and Bundeena. On the Cronulla side, Port Hacking feeds into Gunnamatta Bay, Burraneer Bay, Dolans Bay, Gannons Bay, Yowie Bay and Gymea Bay. On the Bundeena side, it feeds into Simpsons Bay, Fishermans Bay, South West Arm, North West Arm and the Hacking River at Grays Point which terminates at Audley Weir in the Royal National Park.

If you'd like to get out on the water, you'll find a list of boat ramps here.

A boaties life in the Sutherland Shire

Kayak and SUP adventures in Bundeena

Click through to See & Do to find out where to go and what activities are on offer in, on and around the water.

Bursting With Flavours is located at 1071 Old Princes Highway, Engadine, Sydney. It is rated 3.3 by ... 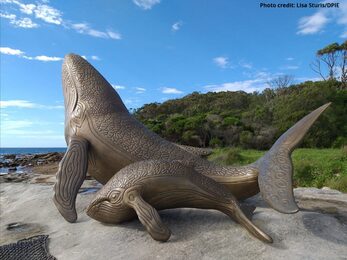