A major part of Cronulla's allure are the beaches and bays that are slap-bang on the border of the suburb. Here, in the suburb considered one of the Shire's most vibrant jewels, it's the beach culture that sets the place apart.

From summer through to winter, mornings in Cronulla are for marching along the Esplanade, diving into the sea pools and enjoying some of Sydney's less-trampled bays and beaches. If you slow down and simply watch the day unfurl you will see an endless stream of joggers striding along the Esplanade to Salmon Haul, the diehard sunbakers who colonise the sun-loungers at South Cronulla year-round and the surfers paddling out to their favourite peak in the early morning light.

Stay put and you might spot a pod of dolphins or a whale breaching the surface of the water. You might even join the early morning swimmers, snapping swim caps and goggles on for their daily splash around Shark Island. When the skies are clear you can see from South Cronulla all the way to the Royal National Park, where the sandstone cliffs sparkle in the sunlight.

After immersing yourself in this dreamy idyll, dust the sand from your feet and head to the high street in the suburb's heart, where you can connect with locals who converge at one of the many cafes like clockwork each day. Sit with everyone from grizzled surfers to bed-haired backpackers and local business types to enjoy a power lunch from eateries that sell everything from poke to sushi, pasta, pizza and salad.

The suburb of Cronulla itself is very easy to navigate on foot, with its high-street finishing where the train line begins. Cronulla Plaza is lined with shops that range from boho boutiques to homeware stores full of hidden treasures and even includes a cinema and two hotels by the beach: Rydges Cronulla Beachside and Quest Cronulla Beach.

When night falls in Cronulla, the bars beckon and the best of them range from slick, bright drinking dens with ocean views to tucked-away small bars for a more intimate experience - try Next Door, Croydon Lane or The Blind Bear to name a few. The annual Australian Music Week also generates a whole lot of welcome noise for the nation's live music scene In addition to regular gigs at venues around Cronulla.

Cronulla may have played a starring role in the 1981 hit Puberty Blues. But the beachside suburb of today is now fabled for having so much more to offer. Zimzala on the Beach at Cronulla 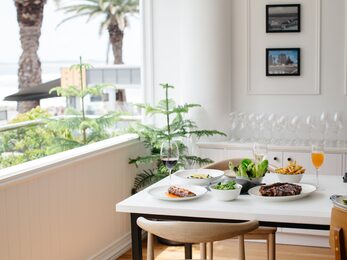 This festival will provide an opportunity for bands to submit for adjudication video recordings of t...