Discover it all on this 3 day itinerary - from rock engravings and middens near Jibbon Beach to Captain James Cook’s Landing Place at Kurnell, to the Bundeena Maianbar Arts Trail and the Joseph Banks Native Plants Reserve.

Escape to the Shire, just 40 minutes south of Sydney CBD – for a list of accommodation options go to https://www.visitsutherlandshire.com.au/stay

In the afternoon, make your way west to Como by train or car and follow the 4.2km Como Heritage and Environment Trail around the peninsula.  You’ll walk past the Como Hotel, the Como Pleasure Grounds, and Como Rail Bridge.  Signs along the way share Como’s history, Aboriginal stories and reveal why famous Australian poet Henry Lawson spent time here. Download the detailed map to help navigate, you can also see the heritage report and take a virtual tour that explains each of the points of interest.

In 1770, when the Endeavour sailed into Kamay Botany Bay and landed at Kurnell, the Gweagal watched from the shore and interacted several times with the Endeavour crew over the eight days that the ship was anchored just offshore.

June and July are the best months to watch the humpback whale migration from the viewing platform at Cape Solander, named after the Swedish botanist who accompanied Joseph Banks on the Endeavour voyage.

*If you have some extra time there are two historical town walks created by the Sutherland Shire Historical Society, one in Sutherland and one in Cronulla. Each walk takes between 30 - 60 minutes. Get Directions
More
Add to Suitcase
Show all highlights on map 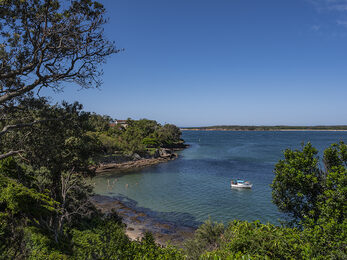 Your snorkelling guide to the Sutherland Shire Full day adventure in and around the stunning Royal National Park and Port Hacking waterway in south...