Gymea is the Gweagal name for the pretty native lily that formed part of the diet of the Dharawhal people who called this area home before British colonisation.

No visit to the suburb would be complete without a strenuous hike through Coonong Creek Bushland Reserve where you might be lucky enough to witness the Gymea Lily in bloom. The walking track wends its way along Coonong Creek before arriving at the heritage-listed Gymea Bay Baths Reserve, where you can thrash about in the shallows with the freestyling Speedo-clad crowds.

Gymea Bay is just a 40-kilometre drive from Sydney's CBD, and it's a great spot to stop for a moment and walk along this coastal waterway. If you are green-leaning, you could join the local Bush Whackers group, which is a great way to meet new people and learn about the Shire's beautiful bushland.

At the heart of the suburb is where you will find Hazelhurst Gallery (pictured above), which has had a significant impact on the area since the Broadhurst family bequest it to the community in 1980 to remain as 'a place of culture'.

Hazelhurst Gallery is in itself a masterpiece. The main building is a lovely labyrinth of rooms that are fuelled by the creative energy of the curators. In addition to hosting world-class exhibitions such as the award-winning Nganampa Kililpil: Our Stars and the annual Archibald, the community gallery has a state-of-the-art theatrette, a shop crammed with quirky gifts and artfully paint-splattered studios offering courses and workshops.

Widen the scope of your arty itinerary to include some food and wine appreciation with a reservation for lunch in the garden-like seating area of the Hazelhurst Café, which is full of temptations. You can also join well-heeled locals in the community at Friends of Hazelhurst, where a bargain $25 membership includes invites to the official openings of all major exhibitions.

From Hazelhurst Gallery it's a five-minute walk to Gymea Railway Station and the suburb's high street, which is lined with great cafes and restaurants and a range of shops - from butchers and bakers to boho boutiques and even a Lebanese restaurant with a cult following. 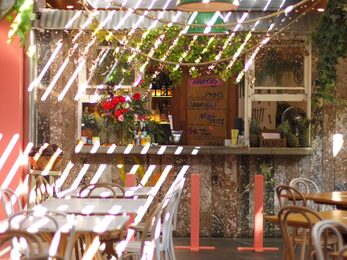 Cafes that best celebrate Autumn in the Shire